The event was also broadcast live on the Ocrim streaming channel.
The purpose of the event was to inform and update the audience on the positive financial results (and not only) obtained in 2017, results achieved thanks to the foresight of Alberto and Sergio Antolini – respectively CEO and vice chairman of Ocrim – and to the constructive commitment by all company employees, but also thanks to synergies and partnerships that have been set up in recent years, giving rise to a unique project related to the controlled supply chain concept.
For some time now Ocrim has been able to boast the title of “Italian Made Partner”, as its products, made solely at its Cremona facilities, are world-renowned. In recent times it has worked to implement this concept, which is no longer only focused on the engineering working, but also on the raw material.
The new Ocrim projects were presented during the event, especially those included in the context of the via Riglio facility (canal port), such as the futuristic Milling Hub, the progress of the works at the canal port, the latest purchases in terms of next generation machinery and much more. There were discussions about the latest discoveries and projects related to the Ocrim R&D department, which increase the safety of the foodstuff processed with the machines supplied by the company. The event also focused on the recent partnership with Acciaieria Arvedi for the supply of steel sheets, as well as on the acquisition of FBC company, specialized in handling systems. 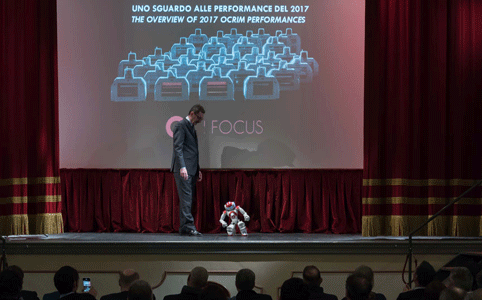 In short, a team effort that the video “Gente Matta” (Crazy People), screened at the end of the event, celebrates by showing on the screen the faces of the people who work and contribute every day to achieving such ambitious goals.